The main aim of this workshop is to realize a redundant network infrastructure to ensure maximum availability in case of a device or path failure. The architecture of the network is shown in the diagram given below. 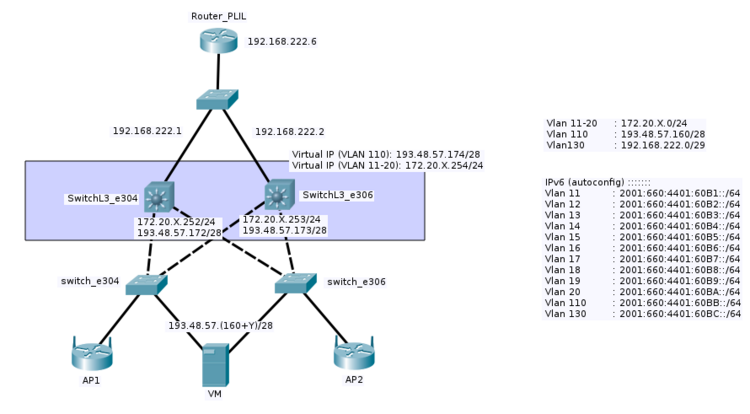 Scope statement for the specific task

We were assigned to configure one of the L3 switches to enable routing protocol(for IPv4 and IPv6) and also to ensure layer 3 redundancy with HSRP.

Materials used for the specific task

During this week, we colloborated with group 2 (Sandra & Elise) to create a list of VLANs and attribute IP address to each of them.

Then, we configured the router to create the vlan database (vlan 11 - vlan 20).

To enable inter-VLAN communication, we had to configure a port (which is connected to switch) in trunk mode and enable encapsulation using the following commands :

To enable routing in the L3 switch:

Configuration of HSRP for ipv4 (for L3 redundancy) :

Configuration of HSRP for ipv6 :

To receive and share the ipv4 routing table with the adjacent routers, we configured the OSPF protocole.

On the other hand, we also configured RIP-ng so that the ipv6 routing table could be shared with adjacent routers.

To create a Xen VM, we started with connecting to the cordouan machine (using ssh):

To start the VM:

We modified the size of the memory and network connection (bridge networking) for the VM :Fichier:WESTMALLEcfg.txt


To connect to Xen VM using console mode, we used the command:

This week we started with installing few important packages in the Xen virtual server such as apache2, fail2ban, bind9, dnsutils and openssh-server. To secure the ssh server, we changed the configuration line (as shown below) of the file /etc/ssh/sshd_config:

To enable root login, we had to generate an asymmetric key (private and public) where the public key will be stored in the server while the user who wishes to connect to the server must have the private key. To generate the asymmetric key, we used the command:

Then, the public key had to be stored in a file called authorized_keys2 (for SSHv2).

And then, we configured the apache VirtualHosts. If the server receives an HTTP request on port 80, it will rewrite the URL to HTTPS on port 443.

To enable the site, we used the command:

Since a MAC address filter was implemented, we had to change our eeePC's original MAC address to the one found in ACL of the Cisco Access Point as below:

To authenticate via PEAP-TLS, it's important to modify the default_eap_type to peap in the configuration eap.conf file:

Then, users' list need to be added for Radius Authentication in the users file:

To connect to the Acces Point with eeePC, these changes had to be made to the file /etc/network/interfaces :

To enable hard disk redundancy (and fault-tolerance), we configured three logical volumes in the host machine :

This logical volumes had to be included in the Xen configuration file /etc/xen/WESTMALLE.cfg:

In the Xen virtual machine, we created RAID-5 volume /dev/md0 :

But, after a system restart /dev/md0 had been automatically renamed to /dev/md127. Thus, we had to create a ext4 filesystem based on md127 and not md0.

To make sure the persistence of the mounted volume, we had to modify mdadm configuration file (/etc/mdadm/mdadm.conf) and file systems table.

And in /etc/fstab we added the following line :

TO enable DNSSEC, we modified the named.conf.options file as below :

Then, we generated a KSK and ZSK file (and renamed them) which will be used to sign our zone.

Then, the following lines were added to include the signed key in the DNS zone file /etc/bind/db.troisiemesexe.lol :

And, the zone file was signed using the command :

To use the signed zone file instead of the unsigned one, we modified named.conf.local file :

And then, we copied the ZSK and KSK key file to Gandi's DNSSEC section.

To reject unidentified calls, sip.conf had to be edited :

The contactacl parameter is used to filter calls from certain IP address. We wanted to limit the calls between the local systems. So we added the ACL to permit only private IP addresses in the /etc/asterisk/acl.conf :

The user configuration file needed some modification so that a SIP connection could be established. For that, we modified the file /etc/asterisk/users.conf and added few extensions (such as 101, 102.. which were attributed for certain username) :

On the other hand, we configured DHCP in the router so that clients (ex: mobile phone) which couldn't be configured with static IP, will be given IP addresses automatically.